Under the surface of the water in the small freshwater wetlands there is an unbelievable diversity of life. There are hundreds and sometimes thousands of different species of animals and plants to be found there. Among the types of animals there, you can find insects, molluscs, worms, crustaceans, beetles and even fish – like sticklebacks, and tiny floating animals called zooplankton. Some of these animals like to live in the water column, some like to crawl about on the stems of the plants growing out of the bottom of the wetland and some others like to live their lives in the muddy substrate on the floor of the wetland.

There are about 8,000 species of ostracods living on earth today. There is evidence in the fossil record that ostracods were prolific on earth almost 600 million years ago and they are still thriving today. About 20 species can be found in our freshwater wetlands. Ostracods are weirder than fiction (picture opposite) and the species found in Ireland range in size from about 0.1 mm to about 5 mm in length. As crustaceans, they rely on a bi-valve shell of hard material to protect their delicate inner organs. They can slam the shells shut to protect themselves, if threatened.

Some of the birds that live in and near the wetland are water-specialists. Some of the water birds you can see are simply passing-through on their migratory passage from one part of the globe to another. Others come there to breed, while some live there all year round.

Little Grebes (see photo) can be found on almost any small wetland in Ireland where they winter and breed. It is such a pleasure to sit and watch this dumpy little bird swimming about on the water or in & out between the reeds and to hear their wit-wit call as they busily move about. 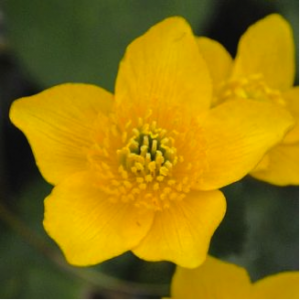 The Marsh Marigold is a very recognisable flower of the small freshwater wetland in Ireland. This flower will come into bloom in April and May and usually heralds the end of winter and the beginning of the proliferation of life in the wetland in the summer period. The flower had strong connotation in old-Irish culture, when it was regarded as having the power to ward off evil influences. The flower was collected on May Eve and placed around the door of the house or even placed on the roof to repel evil spirits at the dawn of summer.