Unfortunately, International Wetlands Day usually happens at a time of the year when there is very little going-on in the Irish wetlands. This is because during January and February the wetlands in Ireland are ecologically dormant and many will be heavily inundated with water or may even be flooded at that time. Most emergent plants will have died- off during the previous autumn and early winter and many of the insects and invertebrates will also have died away and the larval stages will hiding out in the mud at the bottom of the wetlands. In fact, many Irish wetlands look very sad and are not really very interesting to look at in early February.

The best time to visit the wetlands in Ireland is from early May until early September. 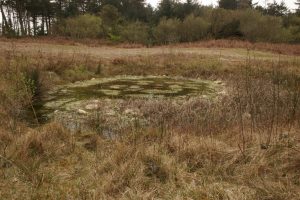 This is an example of a very small freshwater wetland – this one is from County Wexford and the photo was taken in late April 2021. As you can see it doesn’t look like much is happening – but by June there will be lots of plants, insects and aquatic animals to see.