Where are the wetlands?

Information about wetlands in Ireland is getting better and better. Some great work has been done in mapping wetlands and in helping interested people find out where the most interesting wetlands are.

There is a map of the important Ramsar sites in Ireland. You can look at that map through this link. This map provides information on the 45 major wetlands sites which have been designated as requiring and deserving special protection under the provisions of the Convention. But there are thousands of other smaller sites all over the country, there may be some close to where you are right now. Unfortunately, no-one has prepared an accurate map of all the small freshwater wetlands in Ireland. This is likely because no-one has realised how valuable and important these small wetlands are to the protection of our environment.

The good news is that some great work has been done and some of our County Council’s, the universities and other interested groups have realised how important the small wetlands are and they have begun to gather information about them. There are some interesting resources on the following link, but the information is a little patchy. This information is accredited to Wetland Surveys Ireland. Monaghan County Council, as an excellent example, has done some very detailed scientific study on the small freshwater wetlands within its county boundaries, including mapping. 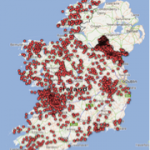 That study found that in total some 1,856 wetland habitats with a total area of 7,319 ha has been identified in County Monaghan, representing 5.8 % of the area within that county. In addition the Monaghan Wetland Map and associated database contains additional site information on 478 discrete wetland sites that have been previously reported in the literature. Think about it, over 2,000 important wetlands in County Monaghan alone. It is very important that similar information is collected for each and every county in the country. Until all of the small freshwater wetlands throughout the Republic of Ireland are identified and mapped, they cannot be effectively protected. So, keep an eye out for progress on the national map of small freshwater wetlands, and if you think you would like to get involved, please contact us!