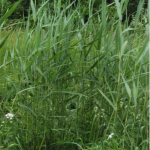 is very common in the small freshwater wetlands in Ireland. In mid-summer the reeds form tall, dense ‘stands’ of vegetation which provide very effective cover for birds and other wildlife. Sometimes the reeds can grow up to 19 feet high (more than three times the height of an average person). This year (2013) the emergence of the new shoot on the common reeds is very late because of the cold spring. If you are interested in taking a look at the common reeds, you should be able to observe them ‘in-leaf’ from now up until next November. After the leaves die, the tall stems remain standing and they survive to produce new leaves next year. At first sight you might think that the reeds are not all that interesting. However, from a heritage perspective reeds which grew in the freshwater wetlands, and indeed in the brackish wetlands near the coast provided early settlers on this island with a very crucial raw material – thatch for the early houses, without which people could not have sheltered from the cold and the rain. Without ready access to this amazing building material, early settlers would have had a difficult problem finding an alternative material to roof their huts with. 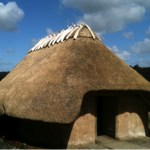 The picture on the right shows how the common reed was used to roof the huts and houses built by the early settlers in Ireland. This particular house is part of the interpretative display at the Irish National Heritage Park (Wexford, Ireland). You can also see large stands of the common reed growing there, on the edges of the Slaney River. A beautiful wetland walkway is maintained at the Heritage Park, and if you are in the locality it’s well worth a look. (Check out the website: www.inhp.com). During May & June the wetland walk is full of beautiful wild flowers and an hour or two there would do your heart-good!

Taken during the first week of May 2013, and shows the first green shoots of new leaves on the reeds at the Raven in Wexford. 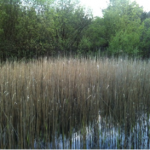 The small wetland looks during the winter when the reeds are dormant.

The small wetlands attract and provide homes and breeding grounds for many birds. Many of the birds in the wetlands are not commonly found near our homes or in the town, so it’s a real pleasure to sit quietly neat the wetland and watch the birds, just for fun!